We Aint Afraid of No Mayans: L. J. Charles and Renee Field

The bad news: It's almost 2012 and the Mayan Calendar says the world will end. The good news: We have two fantastic authors,  L.J. Charles and Renee Field, here for a visit. WE AINT AFRAID OF NO MAYANS!
First, is L.J. Charles who has written an inventive and fast-paced paranormal romance called LIFETHREAD. (*BTW I read Lifethread and it is fun read centered around a heartfelt love story. Lifethread is the first in a fabulous series you can't miss.)
Fin is armed, dangerous, and in love for the first time. She'll do anything to


earn her humanity... except the one thing the Fate's require. 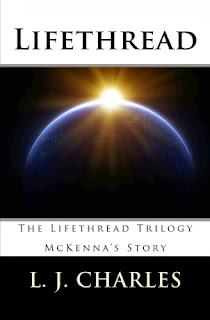 Stuck in her senior year of high school until she earns her humanity, McKenna Fin is responsible for cutting the lifethread of demons, and protecting teens from being possessed. To celebrate her fiftieth year of apprenticeship to the Fate Atropos, McKenna is given a new responsibility, and possibly a quick way to earn her humanity--severing the lifethread of deserving humans. Her first assignment: Nathan Quinn.

When Nathan becomes a primary demon target and gets sucked into Tartania, McKenna's duty as a Fated priestess demands she follow. McKenna can rescue him, no problem, but then she'd have to cut his lifethread. And he's the one and only guy she's been attracted to since forever.

The demons consider Nathan one of their own and fight to keep him. The time limit on Nathan's life is about to run out, and McKenna has to make the decision: sever his lifethread, or battle demons, defy the Fates, and keep him for her own.

You can find LIFETHREAD at the your favorite outlets:
Amazon:http://amzn.com/B004SV2NDO
B and N:   http://goo.gl/oWfXv
Smashwords:  http://www.smashwords.com/books/view/63914
If the world was ending and L.J. could jump into a book, what book would she choose to live in for eternity?

"I would jump into RADIANCE by Alyson Noel. It takes place in Summerland, not quite heaven, more the home of your soul while you're living your after life. It's a place where experiences are limited only by your imagination...and maybe your guide. The possibilities are endless."
You can connect with L.J. at her website:  http://luciejcharles.com
and  on Twitter @luciejcharles  Check her out!

Next is Renee Field. She's written a mesmerizing and sexy romance called RAPTURE. (*Cool Cover.)
Mermen aren't real. That's what biologist Jamie Winters thinks until a gorgeous Greek god enters her life and drowns her, forcing her to rapture into a Siren. Used to logic, she can't quite come to terms with Seth Cutter's magical undersea realm or the fact that he's a macho Titan.
Being a Siren causes Jamie's hormones to go into overdrive, which isn't good when she realizes that's exactly what Seth was hoping for. Sure, the sex is out of this world, but she's not about to change her character. 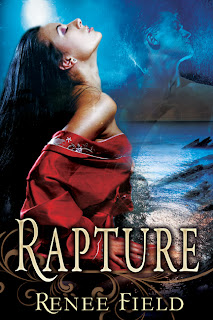 As Prince of the North Seas, Seth is used to having his commands followed. A decade of exile on land was easier than having to deal with the sexy-as-sin Siren who tips the scales of his existence and doesn't listen to one word he says.
They must overcome their prejudices to recover stolen relics that are key to the undersea kingdom, stop a deadly plague and destroy an underwater diva who wants to rule the roost. Are they two souls destined for each other or will the Fates decide otherwise? Seth knows firsthand, Fate can be a bitch.
You can buy Rapture at  http://amzn.com/B0068OWVZE Go download it right now.
What book would she live in for eternity? Renee chose her own Rapture:
"My dream come true is to be a mermaid to discover all the treasurers of the seas and sharing it with a hunky Titan would be awesome."
You can connect with Renee on Twitter @Pararomance and by visiting her website: www.reneefield.com
Don't forget to comment to be entered to win an ebook copy of my novel ENTANGLEMENTS and a $20 Amazon Gift Card. Less than 24 hours before the prizes are awarded.
Posted by Confucius Cat at 4:54 AM