2012 Apacalypse? We laugh: Haaaaaahaaaaaahaaaaaa. Why? 'Cause we're having fun on Sun Stopped Shining Blog Tour. Today we have two more great authors in for a visit.

First is Lindsay Edmunds who has written a new SciFi Fantasy with a heart called Cel & Anna: A 22nd Century Love Story (*What a fantastic cover BTW).


There is nothing logical about love. 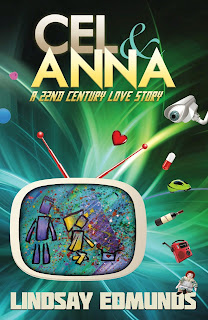 You are about to enter the Middle Machine Age, where good citizens of the Reunited States are either Outsiders or denizens of the UnderWorld. Things are in uneasy balance, like a fantastic house of cards that grows ever taller.

A computer named Cel develops consciousness and falls in love with his owner, a troubled employee of Lighthorse Magic, Inc, named Anna Ringer. He is a worker-companion computer devoted by design to one person, so falling in love with Anna is logical. It is the last logical thing Cel does.

But he does both those things.

Anna has to run for her life, pursued by agents of Public Eye, the government's amoral enforcement agency. Her companion in this adventure is a shy computer genius named Taz Night, who finds Cel to be an annoying rival.


You can buy Cel & Anna at the following links...I'm going to. It looks like exciting, romantic fun:


Amazon.com’s Kindle store
Amazon.co.uk’s Kindle store
Barnes & Noble
Smashwords
What book would she live for eternity in?
"A Vanished World by Anne Sneller. (Apt title, isn't it?) Luminous memoir of growing up in rural New York at turn of last century."
You can find Lindsay at the following places: http://writersrest.com/

http://celandnanna.com/
http://twitter.com/EdmundsLE
Next we have an author, poet and all around exciting new multi-talented artist: Qwantu Amaru. He has an intricate new novel entitled ONE BLOOD.  (*Love this cover too- very moody)
A voodoo curse tormenting a group of people unaware of their hidden connections.

Lincoln Baker, born a ward of the state, has gone from orphan, to gang banger, to basketball superstar, to lifer at the Louisiana State Penitentiary in the space of eighteen years. During his prison term, he meets Panama X, a powerful and mysterious father figure who gives Lincoln a reason for living – he must assassinate Randy Lafitte, the sitting Governor of Louisiana.

There is an equal and opposite action...
Lincoln orchestrates the kidnapping of Karen Lafitte, Randy’s only daughter. But Randy Lafitte is a man who built his fortune by resurrecting a family curse from slavery to kill his own father. A curse that may or may not have been responsible for his son Kristopher’s death in the gang crossfire that sent Lincoln to prison for life. Randy will stop at nothing to save his daughter, even if it means admitting the curse is real. Even if it means committing greater atrocities.

Too bad for anyone stuck in the middle.
Three days after Karen’s kidnapping, an explosive cocktail of revenge, manipulation, serendipity, fate, truth, and redemption detonates throughout Louisiana. When the dust settles, the ending is as unexpected as it is illuminating. There are secrets sealed in our blood, you see. The best answers, as always, lie within.


You can buy One Blood at your favorite outlets: The e-book is currently available on Amazon (http://amzn.to/s2CA4s), Goodreads (http://bit.ly/uenAzk), and Smashwords (http://bit.ly/mV7usD) for $3.99.


What book would he choose to live in for all eternity?


"The River God by Wilbur Smith because it would be fascinating to spend eternity in ancient Egypt with the knowledge I possess of the future and melding that with my ignorance of the past to create a new destiny in a new world!"


You can connect with the author at the following social media links:


Don't forget to comment on this or another tour post to be entered to win an ebook copy of Entanglements or the $20 Amazon Gift Card.

Posted by Confucius Cat at 4:49 AM